Blogging about life with our superhero 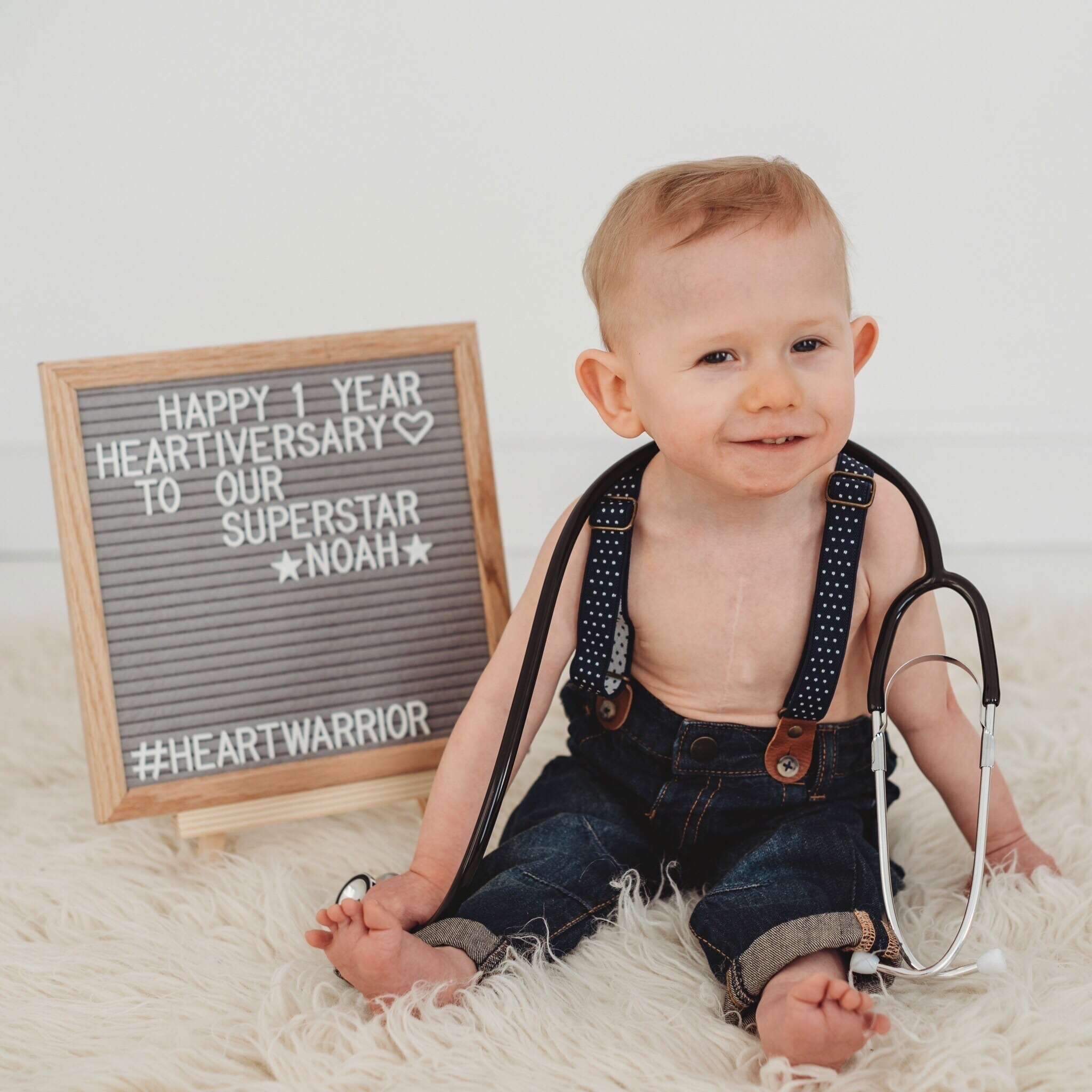 The day that had been looming since our 16 week pregnancy scan had finally arrived. It was a day that, 6 months previously, we honestly didn’t think we’d ever reach. It was the day that our baby’s heart was going to be completely stopped.

I had just signed a form that no parent should ever have to sign – I had signed a consent form to say that I was “happy” for my baby boy to be sliced open down his chest, from just under the neck to just above the belly button. He would then have his breast bone broken, his heart stopped and his little body connected to a heart-lung bypass machine so that his broken heart could be mended in a gruelling 7 hour operation.

At 16 weeks pregnant, we were told that Noah had a heart condition called Tetralogy of Fallot which, in a nutshell, means the heart has four defects – (1) there is a large hole in the wall between the heart’s main pumping chambers – this is known as a VSD. (2) The pulmonary valve (which carries blood from the heart to the lungs) is very narrow – this is known as pulmonary stenosis. (3) The aorta – the major blood vessel – is overriding and sits over the VSD and (4) due to all of the above, the walls of the right heart chamber are thickened (called right ventricular hypertrophy).

Finding out about Noah’s heart early on in our pregnancy meant we had time to research and “prepare” ourselves for this day. However, the truth is, I don’t think we could ever be prepared for the journey we were on. My baby wasn’t old enough to be going through this – he was far too small and fragile. I hadn’t had chance to make up for the lost weeks and months that we’d spent in NICU – all of those cuddles and those hours of bonding that we should have had, we’d lost in hospital. Yet, 8 weeks after finally getting him home, having spent 176 nights apart, we walked down to theatre and I found myself saying goodbye to him once again as I handed him over to the surgical team who would save his life.

Seven horrendous hours later (which felt like seven years), we finally got the call from ICU to say Noah was back from surgery.

I genuinely thought that, after our 6 months in NICU, it wouldn’t surprise me to see him with all of the tubes, connected to so many machines. The truth is, it absolutely broke me. He had a jugular line in his neck, a cannula in his feet and wrists, a chest drain tube and a tummy drain, a breathing tube and a feeding tube in his nose and a catheter draining from his nappy. He had stickers on his head that had been monitoring brain activity. Not to mention the enormous wound down the centre of his chest. He was completely unrecognisable between the swollen body and tubes. During surgery, he had been pumped full of fluids to keep his body hydrated and he was HUGE. His limbs were so so puffy, his eyes were swollen shut – he’d actually gone up a nappy size in those seven hours in surgery – that’s how big he was.

I was petrified and again felt so so helpless. It took me back to the NICU days where I couldn’t do anything except “be there” and hold his hand. The recovery was down to the doctors, nurses and Noah now.

Thankfully, the surgery had gone well and our heart surgeon was very pleased with the repair. Heart babies are expected to go home 5-7 days after open heart surgery – how insane is that?! The strength these tiny humans have absolutely astounds me.

Unfortunately, Noah chose to take the difficult path in recovery and we didn’t go home after 5 days…or 7. He contracted pneumonia post surgery and after some incredibly difficult, unstable days, Noah needed emergency catheter surgery to have a stent fitted.

Despite the setback, his body did recover (it just took a bit longer) and the strength that he’d shown in the first 8 months of his life, along with his cheeky smile, returned bigger and better then ever before.

After 24 days, Noah was discharged from hospital and we could return home again as a family. We had to learn how to pick Noah up again, because post surgery he couldn’t be lifted under his arms – he had to be scooped up instead. He couldn’t be bathed for six weeks and, similar to our NICU discharge, we went home with a bag of medicine that needed to be given countless times a day, with a checklist of warning signs and what to do if the unthinkable happened.

One year on – on Noah’s first heartiversary – I could not be prouder of my boy. Lots of people have asked if Noah is now “fixed”. Having a baby with a CHD does not end after surgery, unfortunately. We continue to have regular cardiology checkups, and at some point, the stent that Noah had fitted will need to be ballooned and, later, replaced. The journey is lifelong and is definitely not easy.

However, we have a baby who is a WARRIOR. The strength he has shown to recover from all of the battles he’s faced is just incredible, and he is, quite simply, amazing. He has gone through more in his life than most adults do in a lifetime yet he still smiles the cheekiest grin every single day.

We’ve just had a little photoshoot with the wonderful Captured by Roxy to celebrate just how far Noah has come in the last 12 months – when I look back at the images of Noah on the 4th January 2018, hours after his surgery…and then I look at these photographs, I could burst with happiness.

“Some people never meet their hero. I gave birth to mine.”

We use cookies to ensure that we give you the best experience on our website. If you continue to use this site we will assume that you are happy with it.OK